Guidance for the Registration of Firms 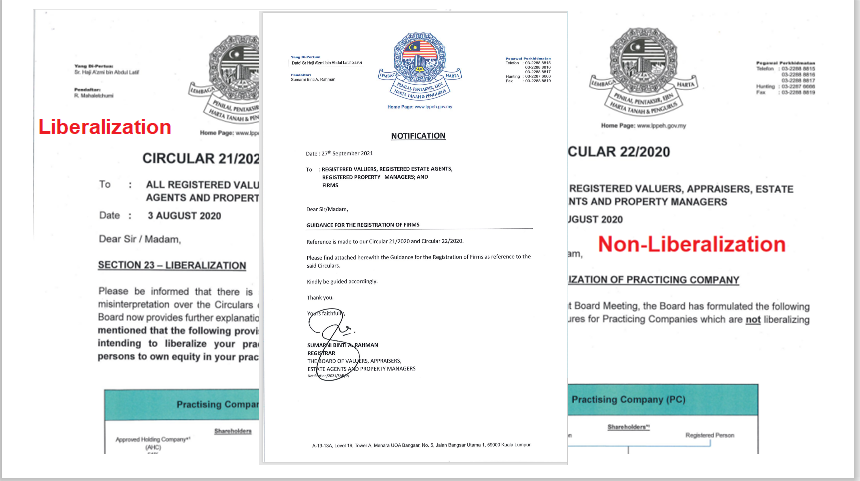 Referring to the Notification issued by Board on 30 Sep, 2021 below:

As we know, a business is a venture to make profit. In professional practice, it is a vocation which is governed by law, code of conduct and ethics. The nature of such “business” is not merely just to make profit but to serve its good cause as well. This is like a medical doctor who is to save life and elevate pain and suffering, rather than a business of making profit. This is the same for estate agency practice.

Therefore, this section 23 (4)&(4A) is to govern the profession for a good cause. A Registered Person is to devote his time and skill in satisfying his clients in a location. He cannot be present in multiple locations (branches) at the same time. This is the core purpose of this clause in the law.

In such context, the below scenario is to illustrate the application of S.23(4)&(4A) in the formation of firm under the Liberalization Mode.

Over time, one of the children of the directors got qualified as REA and therefore, wants to open up a branch in Penang.

This son is not in compliance because he holds part of the 49% of the Non-Registered equity in the Practicing Company (PC).

How do you interpret the logic of b(vi) in highlighted box under Liberalization in the above Guidance from the Board?

Notwithstanding, the fact that the son who recently became REA does NOT mind not having the share of AHC in the Practicing Company.

Similarly, if he is a new REA aspiring to make some money in Penang and now invited to join this mega firm (Practicing Company in KL). Due to reasons not related here, he is ONLY allowed to join the Non-Registered Entity yet to function as a Resident Manager. This again is in contravention of the b (vi) explanation in the Guidance by the Board.

In a hypothetical scenario above, his practice in a branch does NOT mean he has a say in the running of this branch! Indeed, within PC-KL, he is a minority shareholder within Non-Registered Entity.

Now, assuming that his branch is not a subsidiary – and just being an office wholly owned by the Practicing Company in KL, he cannot be holding 49% (or smaller) yet decides for the operation of this branch. He does NOT have the control in the Board of Directors of the Firm. This means his opinion and voices would not be heard.

Amidst, he may be employed as a Resident Manager (which he is qualified), he has no voice in company law for the branch even when he is the branch registrant.

When a REA who is legally liable for the running of a practice is NOT allowed to hold shares of AHC 51% (or more), it could only mean two things:

If this were to be allowed, the practice of the profession on the ground is compromised. Hence, there is this compliance in place to disallow such shortcomings.

On the other hand, if he chooses to be an investor and not a REA, he can hold shares in the Non-Registered Entity (49%) and just be an investor to enjoy fruits of his investment. He cannot practice his profession as Registrant under this umbrella of corporation (be in the subsidiary or parent company) because by virtue of his minority shareholding he cannot make his voice heard.

The moment he acts as a REA/RV/RPM within the umbrella, he MUST take responsibility being part of the AHC (51%) to shoulder the liability as a registrant. And, being a natural person he can only be present at a location thus, cannot have shareholding in any other subsidiaries to comply with s.23(4)&(4A).

If he were allowed to hold shares in different companies (parent together with subsidiaries), it means splitting the attention and conflict of interest in devotion of time and attention as a Registrant.

In the correct manners, the REA in Penang should be invited to

The Liberalization Mode is to facilitate investment of Non-Registered Entities to synergize growth of modern firms, in both technology – proptech firms as well as manpower.

NOT MORE THAN ONE FIRM

S.23(4) & (4A) has this clause installed for a purpose above – a professional cannot be at multiple locations at the same time, hence no more than one firm practice.

Imagine a Penang subsidiary has a REA as branch Resident Manager, and he also own shares in the AHC of the Practicing Company (PC-HQ). This means that he is in-charge of Penang branch – although holding 49% of the subsidiary. Now, we need to be clear that legal requirement of the practice by firm (ATP) is not the same as Controlling Shareholding of a subsidiary.

Although the Penang REA is legally the registrant of the Penang Branch, he is NOT the majority Controlling Shareholder of the Penang Subsidiary. In a way, he can only be a profit sharing shareholder and NOT allowed to overturn the decision of the Parent Corporation (PC-KL). This gives the purpose of the PC-KL to expand to Penang, in all natural course of business expansion which maintains parental control.

To elaborate better this compliance with “Not More than One Firm”, I give another example as below.

If you are a SMART investor…

You might think of having a firm in KL, and get a REA in Penang to form another subsidiary as case above, at the same time, you share with him some smaller % of shareholding in the subsidiary like below.

CAN THIS BE ACCEPTED?

The purpose of the above arrangement is to benefit from both PC-KL as well as the branch subsidiary shareholding. This is kind of I own KL and Penang profits! When Penang makes money, I want to get more sharing!

According to Liberalization Mode, this is disallowed.

This means he has division of his professional attention as a registrant when he owns shares in subsidiary in person. In simple term, he is divided in his attention because he has more to lose. In fact, by shareholding in the Practicing Company, he already has profit sharing (51%) of the branch.

This is akin to having a wife in KL yet still want a mistress in Penang. You cannot be fair to both!

Hence, the correct way is to leave the branch to his other registrants who do NOT own shares in the AHC. This in the circular diagram is called “Other Registered Person”.

This is a complicated topic as it involves Companies Act 2016 and the VAEP Act 1981 together with the VAEP Rules, 1986.